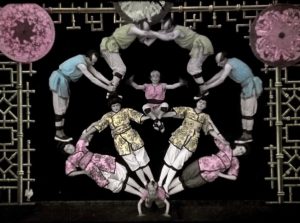 Amongst Georges Méliès, Segondo de Chomon was one pioneer of experimenting with the possibilities of the new medium film in its very beginnings. Les Kiriki gives a lively expression of his work, using basic film tricks to create the illusion of stunning acrobatic performance. Especially with young children the reenactment of these tricks can be a playful experience to understand the filmic principles of ‘perspective’ and ‘illusion’.